The word “Opal” is from the Greek “Opallos” meaning to “see a change of colour”. Each opal has different colours, shape and size. When rotated, the Opal displays constantly changing spectacular colours.

Today in the gem centres of the world, Opals are recognised as precious gemstones on a par with Diamonds, Emeralds, Rubies and Sapphires.

Where does Opal come from?

All of Nature’s splendour seems to be reflected in the manifold opulence of fine opals: fire and lightening, all the colours of the rainbow and the soft shine of far seas. Australia is the classical country of region. Almost 95% of all fine opals come from the dry and remote outback deserts, Australia.

This is the home of the famous Black Opal and it derives its name from the colour of the ‘nobbies ‘or pieces of rough Opal in which the gems are usually found. Black Opals were first discovered at Lightning Ridge in 1903 and today the top-quality Black Opals (brilliant red on a black background) are the most valuable of all Opals. However, there are many other beautiful Black Opal colours from which to choose. 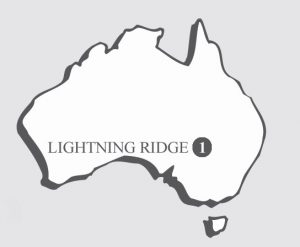 This is the home of the beautiful Queensland Boulder Opal, which many experts declare to be the brightest and most attractive of all the Opals found in Australia. The Opal is found in ironstone and sandstone boulders which are millions of years old. Despite new mining techniques, production from the Queensland Opal mines is unfortunately still very limited.

This is where the ‘white’ or ‘milk’ Opals are mined. Opal was first found in the Coober Pedy area in 1915, but it was not until 1925 that the mining camp was given the name Coober Pedy, which is aboriginal meaning ‘White man in a hole’ … and that is exactly what miners did then, and still do today … live underground to escape the fierce heat of summer. 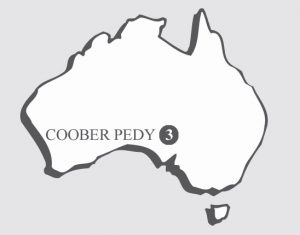 How Opal is formed?

Back in prehistoric times, around 65 – 140 million years ago, central Australia was an inland sea. The evidence that Australia used to have an inland sea is that many fossils of shells and fish bones have been found from inland of Australia. Fine marine sands rich in silica were deposited around the shoreline.

Around 30 million years ago, lots of silica gel was released into a solution which filled cracks in the rocks, nature’s intense heat and moulding processes then hardened the gel and formed precious Opals. It takes about 5 to 6 million years for an Opal to form 1 centimetre thick. Some fossils of sea shells and fish bones have also been replaced with Opal.

Opal is non-crystalline silica (similar to quartz), combined with water. Opals consist of 3% to 10% of water. Other gemstones like diamond, sapphire or ruby are formed crystalline.

Myth and History of Opals

The word Opal comes from the Latin Opalus which means “precious jewel.”
Opal is not only one of the world’s most beautiful precious gemstones, it is also one of the worlds rarest. Opals rarity has made it desirable especially among the nobles.

In ancient times, Opal has been a favorable gem for imperials and royal families of European countries. One of the famous generals during the Roman Empire, Marcus Antonius was going to give a beautiful opal to Cleopatra. But that stone was owned by Nonius, a Roman politician and he denied to sell the stone to Antonius. Antonius got angry with Nonius and banished him out of Rome.

French Emperor Napoleon gave to his wife Josephine an opal called “The Burning of Troy” because of its strong play of colors.

In England, Queen Victoria loved this precious gem and always wore opal jewellery. Because Australia has been the colony of England, English Royal family owns many high quality opals now.

The Arabs believed that Opals fell from the sky and the Orientals referred to them as “the anchor of hope”.
Opal Birthstone

October’s birthstone Opal symbolizes faithfulness and confidence. Throughout history, the gem has been regarded as the stone of good fortune and it was believed Opals possessed magical power.